The Right Reverend Peter Manto became the Bishop Ordinary of the Diocese of Central States of the Reformed Episcopal Church on January 1, 2020.   He and his wife, Janice, live in Cincinnati, Ohio.  Bishop Manto has four children and sixteen grandchildren. 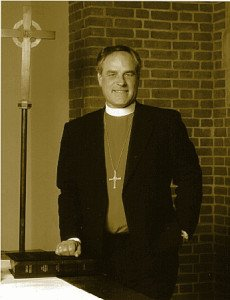 The Right Reverend Daniel Morse is the Bishop Emeritus of the Diocese of Central States of the Reformed Episcopal Church.  He was the founding Missionary Bishop of our diocese and its’ first Bishop Ordinary. He resides in Lynchburg, Virginia.

The Reverend Kenneth Mills, Vicar of Holy Cross, established Holy Cross in October 2016, as an extension work of St. Jude’s Anglican Church, Richmond, VA while he was a Deacon. On Veteran’s Day 2017, he was ordained a presbyter by The Right Reverend Peter F. Manto, Bishop of the Diocese of the Central States. When the DCS Standing Committee made Holy Cross a mission of the Reformed Episcopal Church, Ken was named its Vicar. He serves as Treasurer of the Diocese of Central States of the Reformed Episcopal Church.

Ken is a native of Memphis, TN. After a 20-year career in the banking industry, he joined the accounting firm, KPMG LLP, where he served as a management consultant for sixteen years.  In 2016, he retired early to prepare for service as an Anglican Priest. He holds a Master of Arts in Theology from Nashotah House Theological Seminary in Nashotah, WI, a Master of Business Administration from Belmont University in Nashville, TN, and a Bachelor of Arts from the University of Memphis with a major in journalism. For more than 20 years, he served as the Bible Study Fellowship Teaching Leader for Men in Richmond, VA.   Ken enjoys swimming, biking, playing the piano, and reading. His wife, Gigi, is an elementary school teacher.